Songwriting in Mid-life: Crisis or Catharsis?

Greg Morton, a Facebook friend and wonderful guitar player here in Tucson, recently posted a quote from Timothy B. Schmit, bassist and vocalist of Eagles and Poco fame: “I didn’t peak in my 20’s or 30’s, like a lot of songwriters do.  I’m starting to get it now, which keeps me hopeful.”  I didn’t respond to the post at the time, but I’ve been mulling it over in my mind for the past couple of weeks.  The quote brings up several questions about songwriting and creativity in general that I find interesting: how does the nature vs nurture question relate to talent, why is it difficult for many of us to develop new skills as we age, and is there actually a “peak,” or do songwriters “burn out” for other reasons?

When I was in my early twenties, a musician with a competitive streak who resented the attention I was receiving for my songwriting commented dismissively about my “way with words,” as if it were a gift dropped in my lap by the powers that be; conversely, his musicianship was something he had earned through hard work and dedication.  While this was clearly a dig born out of jealousy, the notion of a “way with words” as a gift is a common one, and it overlooks the work and effort required to become a good lyricist and songwriter.  While he was listening to records and copying riffs, I was reading anthologies of poetry, imitating rhyme patterns, and writing angsty odes to adolescent suffering.  If you think of “having a way with words” as a gift of nature, you’re less likely to do the work and practice to become a good lyricist.  When you play in a band with the likes of Don Henley, and your lyrics don’t measure up, it may be tempting to give up and tell yourself that you just don’t have “the gift.”

Former US poet laureate, Billy Collins said, “we’re all born with 200 bad poems in us.” Perhaps this can be said of songs as well.  The goal is to get those bad songs out of the way and destroy the evidence.  I probably wrote more than fifty songs between the ages of sixteen and twenty-six.  I perform none of those songs publicly now, but the writing of them, the practice, allowed me to develop the skills and techniques I use today.

Several of the commenters on my friend Greg Morton’s post wrote about how they had come to songwriting in middle age and felt good about their work.  This is admirable.  From my perspective, it’s difficult to do something new as you get older, particularly something that requires honing new skills.  One of the commenters said that songwriting scares him because he’s afraid of being trite.  And there’s the rub.  At forty, or fifty, or sixty, you become your worst critic.  You beat yourself up.  You edit yourself off the page.  You know damn well when something is trite.  At sixteen you can write a vague lyric and think it’s profound; you can coerce a couplet into rhyming by using the most awkward syntax imaginable, and rather than admitting that no one talks like that, you applaud your brilliance.  I remember learning to play the guitar as a teenager, struggling to master the barred F chord while fantasizing that I was the next Bob Dylan.  It’s harder to do that now.  I have a mandolin that sits in its case because I can’t tolerate the sound of my own playing.

Perhaps it comes down to passion.  While I would like to play the mandolin, I don’t have enough passion to sustain the effort.  I work at it for a little while but never long enough to make much progress.  This brings me around to the notion of songwriters “peaking” at a certain age. Perhaps we know we have peaked if we’ve lost our passion.  Perhaps we have nothing left to say or nothing left that we feel we need to say.  In 2000, after “Fire and Rain” made the list of NPR’s 100 greatest songs of the 20th Century, I heard James Taylor discussing why he didn’t write many songs anymore.  “I’m not as emotionally intense,” he said. “I’ve found other solutions - emotional solutions in my life.”  Perhaps when we’re older, we’re simply not as intense, not as driven.  I’m no longer driven to write songs for the sake of writing songs.  I don’t suffer anxiety when I haven’t written a song for a while in the way I did when I was younger.  But certain events in my personal life, the death of my mother from Alzheimer’s, watching loved ones struggle with addiction, have compelled me to write.  The political events of the last four years, the COVID pandemic, and the desire to tell the stories of refugees seeking a better life inspired my latest record, Go to Ground.  Instead of one big peak, I’ve had a series of little peaks.

I commend Timothy B. Schmit and my musician friends who have taken to songwriting later in life.  There’s no reason to think that songwriting is a young person’s game, and there’s no reason to think that you’ve burned out just because it’s been a while since your last song. If there’s a story to tell, tell it.  If the rhymes don’t sound natural, rework them until they do. If you can’t find a rhyme for a word, choose a different word or change the order of the words.  Some songs come out quickly and some require forceps.  When you’re passionate about your song, it’s time well spent.

Now, perhaps I should go and dust off that mandolin. 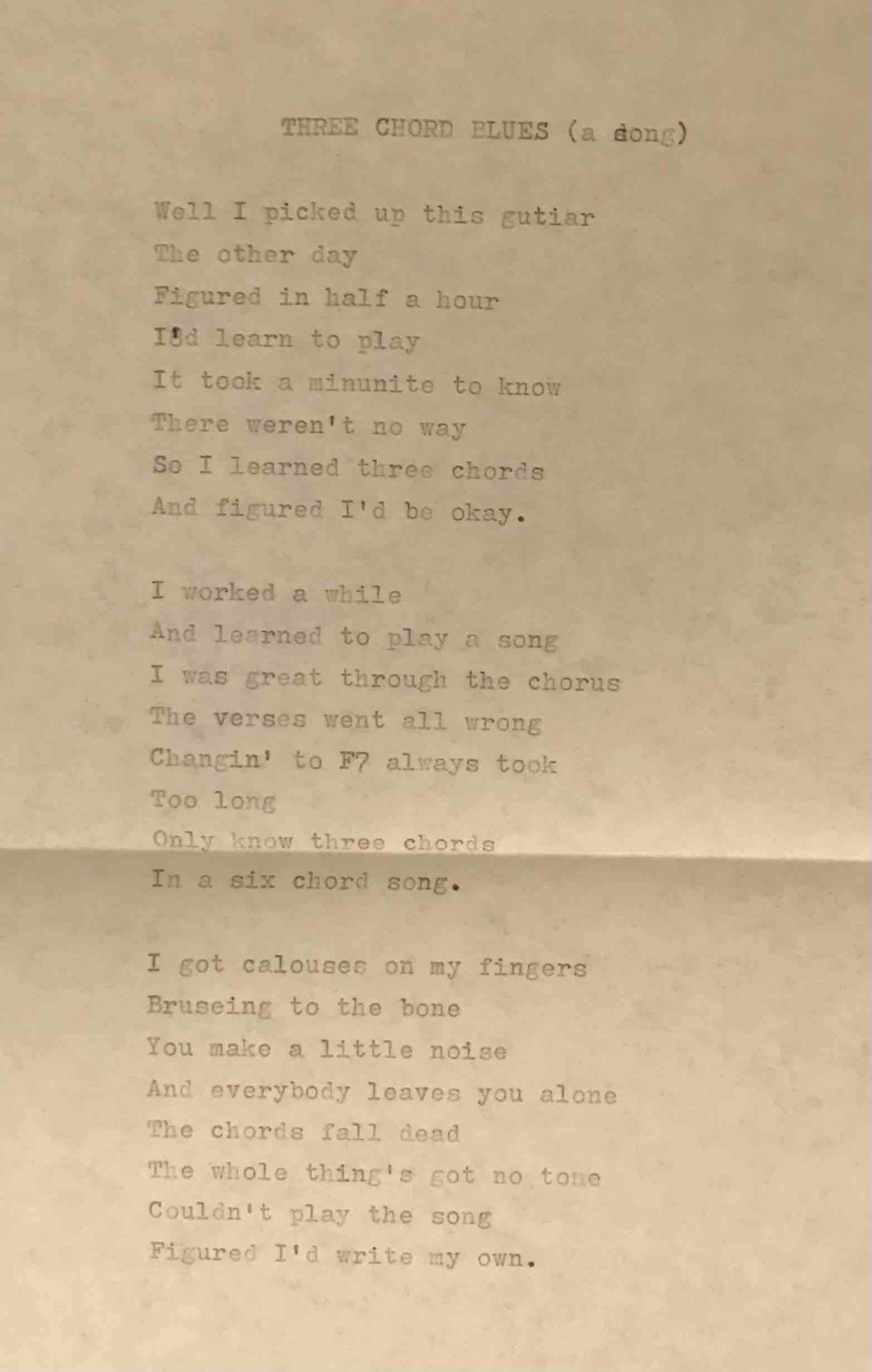 Remember manual typewriters? I found this among my 200 bad poems, circa 1977 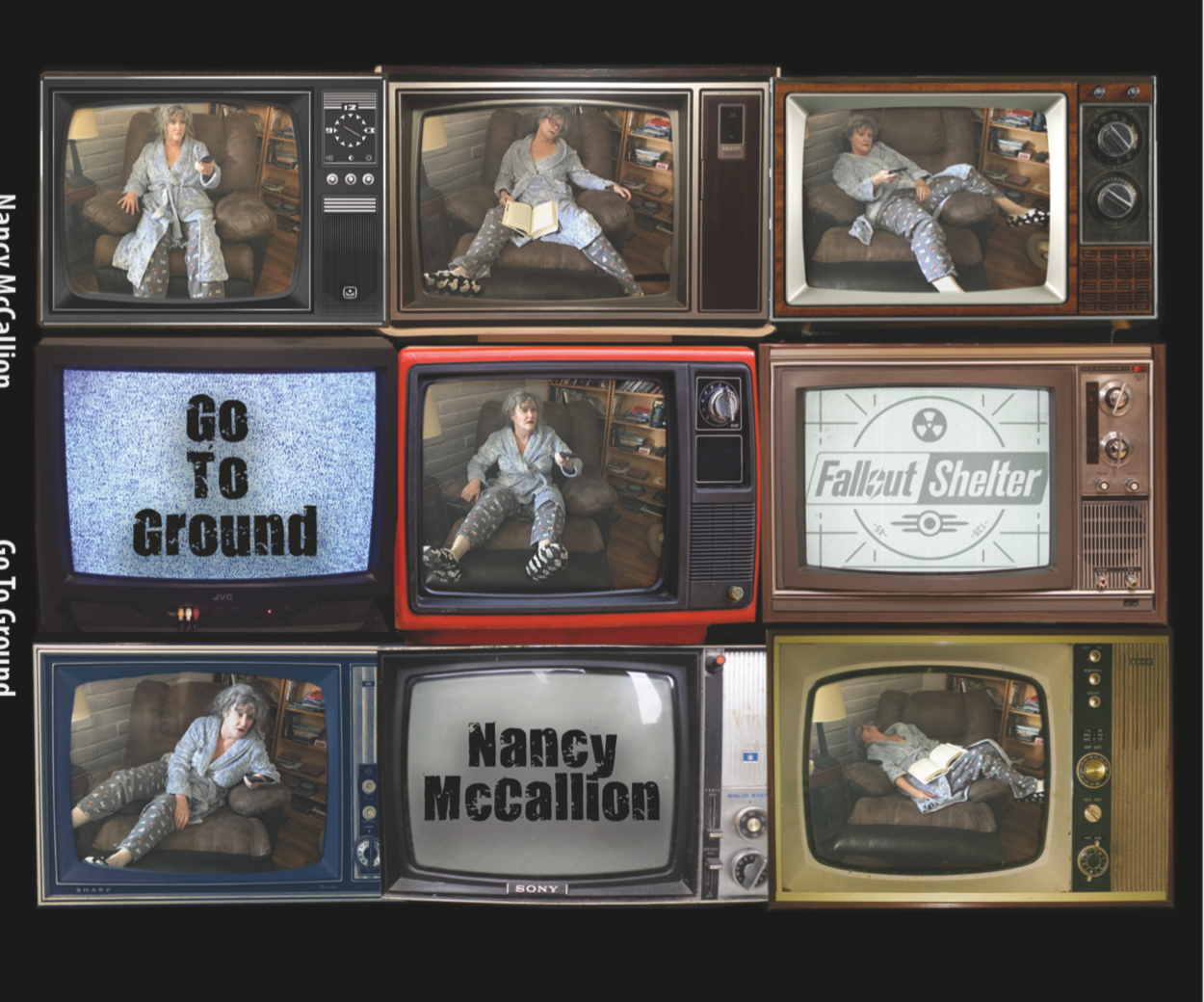